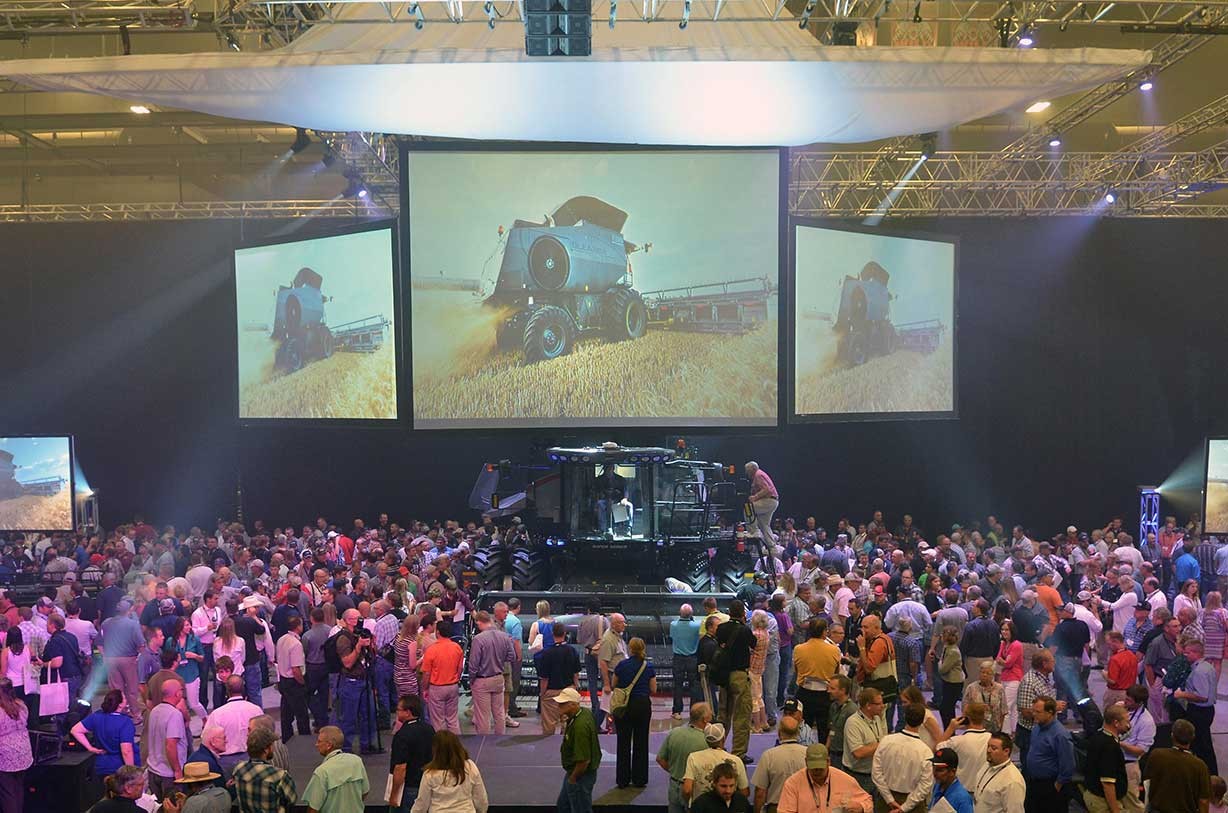 Launched on the Optimum Harvesting Performance platform, Gleaner’s newest combines are the culmination of design refinements that further reduce the liabilities of weight, size, fuel consumption, wear and complexity while maximizing capacity, grain quality, reliability and durability. These attributes have been part of many of the brand’s design principles since it was introduced in 1923, and they heavily influence today’s Gleaner Super Series combines.

“Since the day we launched the Super Series, we’ve been developing the Gleaner combine platform so that all functional areas of the machine deliver optimum performance and efficiency,” says Kevin Bien, Gleaner brand marketing manager at AGCO. “We’ve created a light, nimble combine designed so that the horsepower is used to efficiently cut and thresh the crop, not to move a heavy machine or overly complex system through the field.”

“With the dual turbochargers, these engines deliver more power and run as cool as our Tier 4i engines that didn’t have external-cooled EGR,” Bien says. “Farmers are going to be thrilled by the power bulge these seven-cylinder diesel engines deliver.”

In addition to their hallmark durability and simplicity, the new Gleaner S8 Super Series combines have several new features, delivering more efficiency and keeping you in the field longer. First, S8 models will have the new heavy-duty Dura-Guard™ two-speed-rotor gearbox with larger sheave and belt. Designed specifically for the S8 Series and built stout for the higher demands of the Class 8 machine, the gearbox provides a wider overlap on speeds. This new speed range gives operators the ability to run on the high side of the low range in a lot of crops for maximum efficiency. The gearbox also features the ability to manually reverse the rotor.

To keep you in the field longer, fuel tank capacity has been increased 53 percent, from 150 to 230 gallons. The 2014 S8 models will incorporate the smaller drum straw chopper introduced on 2013 S7 models for reduced horsepower requirements as well as a high-speed feature for better residue chop. This change, in addition to a reduction of discharge paddles on the rotor, provide better venting of the processor as well as reduced chance of separator buildup in some conditions.

All S8 models will feature Gleaner’s optional XR™ transmission with two-speed hydro for greater   climbing ability on hills and convenient on-the-go shifting. The two-speed on-the-go shift will be done from a button on the right-hand console for improved hill-climbing performance and better acceleration on the road.

All S8 models will have a new silver-gray livery and new decals. A unique, special-edition graphite wrap on a gray chassis with chassis-gray wheels, chassis-gray roof and special S8 decaling to match also is available on a limited special order.

During the three-year process of creating the S8 Super Series combines, the goal has been to redesign each vital function of the combine for greatest simplicity and efficiency, thus focusing the combine’s power on threshing and separating the grain.

To that end, the S8 has simpler, straight-through shafts and no power-robbing, 90-degree gearboxes or CVT drives found on other combines. Its transverse-mounted rotor and processor are 30-by-90 inches, providing 48 percent more throughput area than previous models and 360 degrees of threshing and separating area. Unique four-section, 17-bar concave and wider-spaced helical bars deliver increased capacity, and the end result is gentler threshing. Because grain also is in the separator a shorter period of time, Gleaner delivers unmatched grain quality. Finally, the processor is designed to harvest multiple crop types and in varying conditions with minimal changes to the machine.

To optimize capacity and throughput, the front conveyor chain has been configured to release crop to the rear conveyor faster, where 50 percent increased torque on the rear chain’s drive system helps pull the crop into the processor for quicker feeding. The clean-grain elevator has 30 percent more capacity and moves grain away from the shoe more quickly. With a larger, deeper grain auger trough, below-centerline cross auger and heavier paddles, the redesigned clean-grain auger is efficient, yet gentle on the grain.

In addition, Gleaner’s SmartCooling™ system with reversing variable-pitch fan not only eliminates the need to clean radiators, coolers and rotary screen, it keeps the engine compartment clean and the engine cool with as much as 66 percent less horsepower. Finally, the 2014 S8 models will incorporate the smaller drum straw chopper introduced on 2013 S7 models for reduced horsepower requirements as well as a higher speed feature for better residue chop. Gleaner’s straw chopper requires less horsepower (up to 40 HP) to operate compared to competitive full-width choppers, yet easily spreads crop residue the full width of the header.

“Today, what you get from the new Gleaner S8 Super Series combines is the lightest, most durable Class 6 to 8 combines anywhere,” Bien explains. “These combines maximize your productivity and reduce overall operating inputs, from fuel to downtime, compared to the heavier power-consuming combine designs of competitors. We’re proving that elements such as low weight and durability are not always mutually exclusive.

“You can have a combine that’s smaller and lighter and still has more threshing and separating area than any other ?? we know because we’ve built it,” he adds.

The newest Gleaner combine will be on display at fall farm shows beginning with the 2013 Farm Progress Show in Decatur, Ill., where it will be on the AGCO lot, off Central between Second and Third Streets. The combine also will be working in the field during harvesting demonstrations. For more information about Gleaner combines or to find a dealer near you, visit www.GleanerCombines.com.

Note: For background information on the key Gleaner models that led to the S8 Super Series, download this document.

Gleaner is a registered trademark of AGCO. AGCO Power, Dura-Guard, Smart-Cooling and XR™ transmission are trademarks of AGCO.