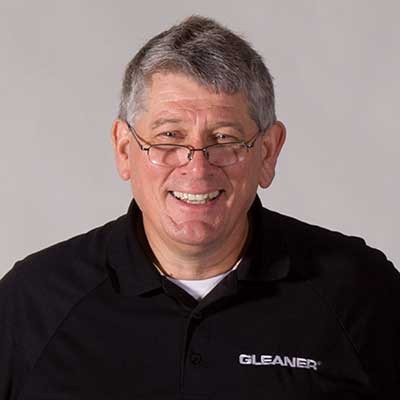 Bien was chosen by USCHI for his long-time support of the organization as well as for his commitment to the business success of custom harvesters. Most noted is his work with the USCHI Scholarship program and his ongoing involvement in educating and working with custom harvesters to help them improve their businesses.

“When we started the scholarship program, Kevin wanted auction proceeds from the Gleaner combine to go to the scholarship fund where it would most benefit future generations. He made that happen,” says Shorty Kulhanek, of Kulhanek Harvesting, Mergargel, Texas, who assisted in nominating Bien. “Kevin has always been a leader among the major manufacturers doing things that would benefit USCHI and our members. He is very deserving of induction into the Hall of Fame for all he has done.”

The U.S. Custom Harvesters Hall of Fame was founded in 1998. It is the only nationwide honorarium in the United States which recognizes the top harvesters and supporters of the harvesting industry without regard to affiliation with commodity groups, membership organizations or industry sector.

“I am extremely honored and humbled to be inducted into the USCHI Hall of Fame,” Bien says. “The presentation was very moving. I thoroughly enjoy working with this fine organization, and I just can’t thank everyone enough for this recognition.”

Bien began working for Allis Chalmers Corporation after graduating from the University of Wisconsin-Whitewater. Throughout his more than 40-year career, Bien has worked extensively in the area of harvesting technologies. His first assignments were in the Midwest with Allis Chalmers, and he eventually moved to Kansas City, the manufacturing location for AC’s Gleaner combines. Bien was instrumental in maintaining the company’s strength as the agricultural assets of AC were purchased by Deutz. In addition, he was one of the original 35 people invited by Robert Ratliff to join in the formation of AGCO Corporation.

The skilled and tireless marketer has led several crucial divisions for AGCO including launching and energizing the Fendt® brand in North America and reinvigorating the Gleaner brand beginning in 2005 with the introduction of the R6 Series combines in 2008. Subsequently, Bien drove the introduction of the Gleaner Super Series, the world’s first Class 8 transverse rotary combine, propelling the brand to set company records for growth, profitability, sales and customer loyalty.

Throughout his career, Bien has worked to bring better equipment and improved harvesting technologies to the industry, doing so with his trademark passion, humility and hard work. Bien doesn’t know a stranger, and he offers genuine care and commitment to the many customers and industry colleagues he considers to be friends and family.

Today, Bien continues his commitment to the harvesting industry and future generations by mentoring young producers and custom harvesters. In addition, he leads and mentors young marketers at AGCO. Most importantly, Bien is the dedicated husband of Judy, for more than 40 years, a devoted father of four daughters and loving “Papa” to a growing list of grandchildren.

NEWS: Visit AGCOnews.com/na for the latest news and information from AGCO.

©2016 AGCO Corporation. Fendt is a worldwide brand of AGCO. Gleaner is a registered trademark of AGCO.

About AGCO
AGCO Corporation (NYSE:AGCO) is a global leader in the design, manufacture and distribution of agricultural solutions and supports more productive farming through its full line of equipment and related services. AGCO products are sold through five core brands, Challenger,® Fendt,® GSI,® Massey Ferguson® and Valtra,® supported by Fuse® precision technologies and farm optimization services, and are distributed globally through a combination of approximately 3,000 independent dealers and distributors in more than 140 countries. Founded in 1990, AGCO is headquartered in Duluth, Georgia, USA. In 2015, AGCO had net sales of $7.5 billion. For more information, visit http://www.AGCOcorp.com. For company news, information and events, please follow us on Twitter: @AGCOCorp. For financial news on Twitter, please follow the hashtag #AGCOIR.